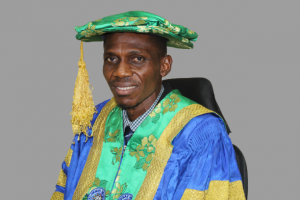 Mr. Omoniyi, Hafis Olawale of the Bursary Department, Federal University of Technology, Minna (FUT, Minna) has been appointed as the new Bursar of Al-Hikmah University, Ilorin, Kwara State by the Governing Council of the institution.

According to the appointment letter made available to FUT, Minna Information Unit and signed by the Pro-Chancellor of the University, Dr. M. D. Abubakar said the appointment was based on his satisfactory performance during the interview held on Tuesday, February 23, 2021.

He was born on April 19, 1976, hails from Ajase Ipo, Irepodun Local Government Area of Kwara State. He attended Biodun Nursery/Primary School, Ilorin after which he proceeded to Unilorin Secondary School, Ilorin.

Mr. Omoniyi, graduated from University of Ilorin (Accounting) in the year 2000. Before then, he was at Kwara State Polytechnic, Ilorin for his Interim Joint Matriculation Board (IJMB) Examination in 1997. He also holds a Master’s degree in Business Administration from the same University. He is an Associate member of the Institute of Chartered Accountants of Nigeria (ICAN).

Mr. Omoniyi joined the service of the Federal University of Technology, Minna in 2007 as Senior Accountant in the Bursary Department. He rose through the ranks to become a Deputy Bursar in 2018.

During his eventful period in FUT, Minna, he was appointed as the Finance Officer for the World Bank Step-B sponsored project in the University in 2010. In 2018, he was also appointed as the Principal Accountant, for another World Bank assisted project, Africa Centre of Excellence for Mycotoxin and Food Safety.

He is a certified ICAN Instructor and has attended a series of local and international workshops on contemporary trends in finance and accounting.

He is happily married and blessed with four children.

Mr. Omoniyi assumed office as the new Bursar, Al-Hikmah University, Ilorin on Monday, March 15, 2021. The appointment is for a single term of five years.